It could be one of the bombs this spring, everything indicates that behind their great friendship there is something more. A kiss at the exit of a restaurant confirms it.

There have been many months of speculation and rumors, but now a photo confirms that Cara Delevingne and Paris Jackson are a couple. No doubt. A newspaper has released the image of them leaving a restaurant in Los Angeles where they are seen kissing and accomplices of their love. Next to them was Macaulay Culkin, who is the godfather of Paris, and his girlfriend, Brenda Song. What do you think of this relationship?

We knew that they were very good friends, almost confident, but an image seems worth more than a thousand words. Cara Delevingne and Paris Jackson seem to be more than friends, we would say a couple, when they see a picture where they are seen eating kisses and in a very affectionate attitude. If confirmed, their relationship will undoubtedly be one of the most famous lesbian couples in Hollywood. 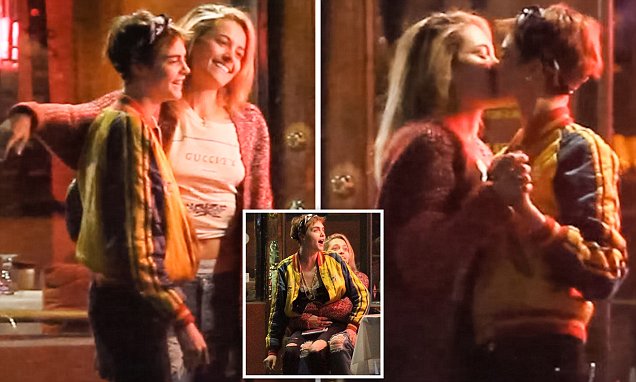 The images have been published by the Daily Mail newspaper that has caught the two leaving a restaurant in Los Angeles with Macaulay Culkin, already recovered from his addiction problems, and his partner. In addition, the circumstance occurs that the one that was actor prodigy is the godfather of Paris since it united a great friendship him with his father, the deceased Michael Jackson.

Last week the rumors were triggered when we checked through social networks, both shared that they were enjoying a night of pajamas. Everything seemed to be a great friendship, but it seems that now they have decided to take another step in their relationship.

The funny thing is that their friendship is close, since the British top and actress, always committed to social causes and now also a writer, met last summer at the MTV Awards gala. But it seems that he was a crush. Through the social networks they exchanged ‘Likes’, and now it is clear that they are more than friends.

It is not the first time we know of a relationship of Cara since for a few months he maintained an idyll with the model St. Vincent. On the other hand, the daughter of MJ never had given that to speak with possible pairs, its last news was that it was the image of Calvin Klein. We will see what all this ends and if any of them decides to confirm what seems an open secret.